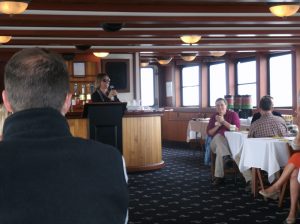 The theme of meeting was to, “hear what [Burlington] Waterfront businesses have in store for Burlington this summer!” Many companies/ locations on the waterfront are already open for summer business or are planning to be in operation within the next 1-2 weeks. For example, the cruises, ECHO, the boathouse, Splash are now open, but the Ferries are expected to be operational within 1-2 weeks. More info at Ferries.com

The Bike Path is fully operational, having completed repairs in time for the Key Bank Vermont City Marathon last month, with the repaired areas being Lakeside Ave to Perkins pier, North of Starr Farm, Northshore area to N Ave ext, 127.

Many of the usual summertime events are going on as planned, with some new businesses added to the Waterfront, as well as Burlington favorites adding new features:

Below is a photo gallery (by Heavenly Ryan) of the Burlington Watefront Tour:

Below are some of the upcoming Burlington Downtown and Waterfront Events for 2013:

The morning cruise on the Northern Lights was great… the rain held off and some sun came through for a brief moment before returning to shore, making for a nice trip.

Thanks to Kelly Devine and staff of the BBA, the speakers, and staff of the Northern Lights for a great morning cruise on the beautiful Lake Champlain and for an encouraging outlook on this year’s Burlington summer season!